Here we go again…
After waiting all of this time to get started, I’m just excited to get going again.  The faster we get started, the faster I’ll get pregnant… The faster we’ll be painting a nursery, and the faster the baby will be here!
The docs had some different ideas this time regarding medications.  The other medication didn’t work until they added a microdose of HCG, so the thought was to switch me to a new type of medication called Menopur.  The benefit (hopefully!) of this drug would be that it contained the same types of medication as last time, but it included some HCG.  Sounded ok to me, anything to help get me through the follicle stimulating process quicker than last time.  The idea that I might be able to be doing another IUI in 11-13 days was beyond exciting.  I spent the afternoon calculating when my due date would be.
I went to the pharmacy in the clinic to buy the new type of injectable medication.  (I’ll discuss costs at some other point to give a general idea of what you are getting yourself into by stepping in the clinic).  Expecting another needle pen, I was surprised to see the new way in which I’d be giving myself needles.
This time, I was given little glass containers that were sealed and had a white powder inside them.  There was also a small glass container with clear liquid.  What they explained was that I would be drawing up the liquid (it was saline) from the one vial, then adding it to the power to make the medication.  The good news was that it didn’t need to be refrigerated, the bad news was that dependant on the dosage, I’d be mixing different amounts in various vials.
Great- I’ve now gone from a non-nurse injecting myself to a non-chemist mixing medications.  I was a tad overwhelmed as this was more intense then simply dialing the twist knob to a specific number, but I can do this!
That night, at exactly 7pm, I started mixing my drugs.  Dan and I thought it was hilarious as now as it actually looked as if I was some needle drug addict.  I had the big needle and I’d be mixing the different dosages, swirling them around until they mixed properly, then adding more.  Cue me flicking the needle to get the air bubbles out, then jabbing my stomach. 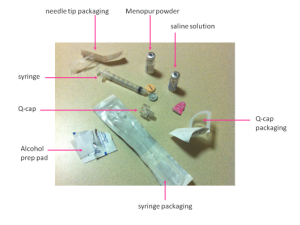 So we learn all about the lab, all about the processes and timelines, and then all about the costs.  I attached a cost sheet here to give you the idea of costs for my clinic. Remember, this does not include the annual monitoring costs, nor the medication that you need to take.
Dan and I learned a ton from the info session and felt we had a really good idea about the process.  And better yet, the odds were definitely in our favour.  Continuing with IUI meant odds around 30% per round, where with IVF (being under 35) we had chances in the high 60’s% that it would work.  I cant recall exactly, but somewhere around 68%.
This was all great news… the harder part was the ethical implications that we needed to discuss.
We were essentially creating life in a petri dish… What did we think about that?  Would we freeze the embryos left over?  If we didn’t they would ‘arrest’ aka die.  What did that mean?  When did life start?  If we freeze the embryos, then both of us died, what would we want the clinic to do to with the embryos?  Let them arrest?  Donate them for research? Donate them to another couple? (remember this would genetically be our kids!).  What happens if we get pregnant and have left over embryos that and don’t want any more children? What happens if one of us dies- would we give each other permission to use the embryos after death? So if Dan dies, could I still try to get pregnant with our kids?  What if I died?  Who would carry the baby?  Were we okay with this?  And last, but not least, what would we do with the embryos if were separated?
Not easy questions…. at all.
Two more cycle days left before we call it all off… and lots of hard questions that we really need to figure out.  Please let this work!