You can call me a lot of things… but unorganized isn’t one of them.  Knowing that Dan and I had to make some serious decisions about what to do if this next Frozen Embryo Transfer doesn’t work, I started to do some serious research.

I’m the obsessive researcher, and Dan normally just nods his head in agreement.  However, these were kinda big decisions so, in the next two days, we both had to become as educated as possible about all of our options to try and make the best decision possible for us.  So off I went.

I actually created little binders of information that I was able to pull together about private adoption, public adoption, international adoption, and surrogacy.  I searched adoption council’s, public forums, medical research, information sessions, and peer reviewed data and just kept hitting print.  I collated all of the information and gave Dan his deadline.  By Sunday afternoon, we had to both read all of the information I found by ourselves and put together a list of questions, concerns, and what if’s.  Sunday afternoon we would sit down and figure out how to move forward.

Much to my delight, Dan delved eagerly into the information with a highlighter and was making notes about questions and concerns.  Sometimes I feel like I’m so invested into this process and he seems less so… he proved me wrong, again.  We both studied up to prepare ourselves for the big meeting on Sunday afternoon.

Sunday afternoon hit and my teacher’s college training was making me twitch as I didn’t have a flip chart to start taking notes in my living room.  I made due and Dan and I thought the easiest way to approach this was to make a Pro and Con list for each of our options.

Option 1: Keep trying with fertility treatments was our first stop.  The Pro list was just as obvious as you would think… being pregnant, having our biological child.  However the CON‘s list was a lot fuller…

CONs- $+++++;  When do we stop?  When is enough enough; I’m dying emotionally and physically; it may NEVER work; we cannot plan anything, cannot go anywhere; always extremely sore

Looking at our list, I was suddenly overcome with emotion.  I knew, right at that moment, we were done.  The list wasn’t even close to done, but I could continue with the CON side of the list for ages.  I broke down completely sobbing on the couch.  We were done.  If this frozen transfer didn’t work, we were done.   I literally wrote on the piece of paper “This is the last time”.  It was devastating and relieving all at once.  I had so many mixed emotions.  I was devastated that this could mean that I would never get to know pregnancy, never get to have my own child, never get to fulfill the dreams that previously seemed so normal… to have a baby.  But on the other hand, I felt like making this decision was like taking a massive weight off my shoulders.  Getting pregnant was becoming my life mission, and finally admitting that I might just not be able to do it, by no fault of my own, was suddenly like a wave of relief.  The pressure was off, the guilt about my body failing was gone, and the fear about new treatments dissipated.  I could breathe again.Dan smiled at me and hugged me until I could settle down.  He fully felt this was the right decision for us right now too. 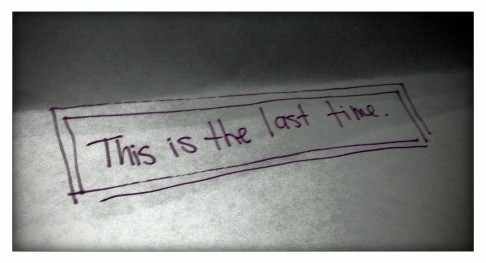 Ok, on we went with our pro and con list.  Next up was Option 2: International Adoption.  This was also a fairly easy one for us, in fact, we didn’t even have to make the list.  Because I have mental health concerns and a history of depression, 90% of countries with an adoption agreement with Canada would automatically exclude us from their list.  We didn’t meet the criteria.  It felt almost ridiculous that we could be discriminated against so blatantly based on medical concerns, however, it technically wasn’t Canada that was discriminating… it was other countries.  So what were we to do?  Cue another breakdown.

As if it wasn’t bad enough that we were going through the hell of fertility treatments due to MY medical issues, now, because of other health issues, we wouldn’t even be looked at for international adoption.  Dan really picked a winner… :S

Okay, so we’re down to three other options… Surrogacy, Public Adoption, or Private Adoption.

Option 3: Public Adoption… After looking into the general timelines and the ages of children that were available (infants were often not available), we decided that Private Adoption would be the route that we would take if we chose adoption.

PROs- Cost-medium; not based on science/miracles; move past ivf/infertility; socially acceptable; help a child who needs a home/altruism; lots of education and assistance available to get started; child presented to you is as a choice; ability to research into the health of the baby and familial history to some extent; can start the process asap; adoption practitioner/agency to assist with process

CONs- If come into agreement while birth mother is pregnant, she can revoke it at any time; only able to work with one Mother at one time so all eggs in one basket; based on luck; no guarantee of lifestyle during pregnancy; not biological child; are we just giving up (fertility); 21 days (+8) that the mother, after the baby is placed in our home, that the mother can revoke the placement; based on luck; no guarantee of medical disclosure of birth parents; timing- average timeline for ‘adopt ready’ status is about 1 year; many adoptions are open adoption- a sliding scale agreement to allow birth parent(s) involvement in the child’s life

While there was heavy pros and cons on each side, this was a real viable option.

Even though this was not the route we expected to even think about, it was an option that we potentially had.  I felt it was important to look into each and every option so we made our PRO and CONs for this also.

PROs- it would be our own biological child; having the option like treating it as if it was our own baby while in utero (baby showers! ultrasounds! getting called when in labour!); legally our own child from the start with no chance of revocation; timing is shorter than other options; high success rate; feeling like part of the pregnancy; we trust Jen 100%; Jen has two other healthy children with uncomplicated pregnancies; Jen’s in a good place in her life and would psychologically be able to do this; there would be no complications during the pregnancy/birth due to me being on anti-depressants or having a bleeding disorder

CONs- $+++++ (actual estimates in Canada range from $70,000 to $90,000); stress on our friendship; definitely not socially acceptable- how do we explain this one to our friends, never mind our own child later on in life; would need to do another IVF cycle as we have no embryos left; not guaranteed to work; how would this be for Jen’s kids- this confusing enough for adults, never mind her own kids; confusing for her daycare kids (she runs a daycare)… plus try explaining this to her clients;

… We decided to take a break.  We made the lists, now we had to figure out where we were going next.  It was down to private adoption, or to have my best friend carry our baby…  Time to get a snack.  Food cures all.

We sat back down with two viable options.  We talked about the pros and cons of each and talked about the ones that weighed heavier than others.  Both potential options were potentially emotionally fueled.  We made the decision that money was not going to play a factor- we couldn’t force ourselves into an option simply looking at dollars and cents.  The heaviest issue for us with adoption was the idea that we could work with a birth mother for months for her to simply change her mind and either not give us the baby, or worse, take the baby back after s/he had been placed with us.  How could this be something we could get through?  Dan had always been a big proponent for adoption and we loved the idea of helping a child who needed a loving home.

Having Jen act as a gestational carrier (surrogate) was, let’s face it, frickin’ weird!  But once we got over that ‘minor’ point, the option was actually interesting.  Dan, who previously laughed off the idea, was now coming around to having some real discussions on how it would work and what it would mean.  What would people say?  … wait, why do we care what people would say?

We spent an hour discussing the pros and cons… and finally came to a decision.  If this round of frozen embryo transfer was not successful, we wanted to seriously look into surrogacy.

Okay, to do:  1) Call Jen and let her know we are actually seriously thinking about her offer to carry our child if this round doesn’t work and pray she doesn’t run at the thought that this might actually happen. 2) Say a prayer that this crazy emotional day was all for naught and hope that the transfer on Tuesday is successful.

All we want is a family… who knew it would be this hard.

3 thoughts on “Impossible Decisions- What next?”